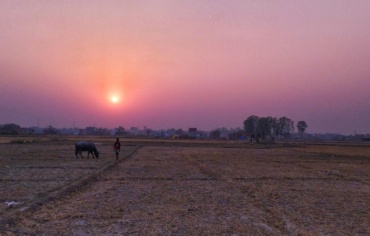 Wherever you work with plants either at home or plantation site taking good care of soil composition is very important.

One way of increasing the organic matter in soil is by mixing it with the fallen leaves of the trees around.

Nature has its cycle; it has its own way of stabilizing the ecosystem. Everything goes back to the soil and mixes with the mother earth. Soil is good and fertile only when it has the fallen leaves mixed in it. Also, the leaf layer forms a natural mulch. As the leaves fall, just mix them with the soil and leave them undisturbed for the next 80-100 days. The leaves will decompose and will serve as manure for the soil. Thus the fallen leaves provide a double benefit – acting as a natural mulch and at the same time fertilizing the soil as they disintegrate.

Another way of increasing soil fertility is by adding compost to the soil.

Composting is a great way to enhance the nutrients of the soil. One can easily make compost at home. The most common raw material for making compost is kitchen waste. Put the kitchen waste in a big container and cover it with dry soil or grass clippings. Keep creating alternate layers of soil and waste until the container is full. Leave it undisturbed for the next 100 days. After 100 days, a very high quality compost will be formed. Other materials that can be used for preparing compost are dry leaves, twigs, fruit rinds, lawn clippings or kitchen scraps. The basic procedure for making compost will remain the same. Now, this compost can be added at the base of the plants or in the plantation area and it will add to the soil fertility.

How will adding this compost to the soil make it fertile?

The answer is here. The dry leaves and compost disintegrates over time and degrades to form humus. Humus is a dark coloured matter produced by the action of the microorganisms in the soil.  It is rich in various minerals and nutrients which are taken up by the plants for their growth. Besides microorganisms, earthworms also play a major role in the decomposition of organic matter and humus formation. They also aid in soil aeration by making tunnels.

The addition of compost to soil changes its texture and properties and enriches it with various nutrients and minerals which can be easily taken up by plants for their growth.