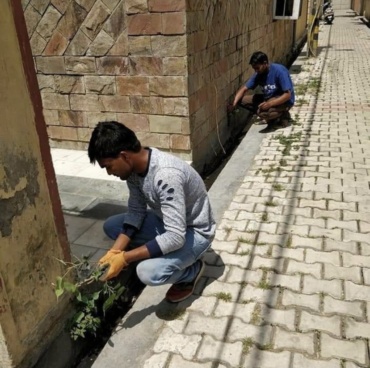 Extraction of the roots of the plant should be done very carefully. Normally when the roots are extracted they have a shoot system that is also extracted along with them. It’s best to have the taproot (main root) and if secondary and tertiary roots come along that’s even better.

After the extraction comes a hardening period. It involves two steps, first is placing the roots in water for few days and then transferring it into a pot where it grows for about a year.

Primarily the roots are placed in a glass bottle or a container full of water so that the roots remain turgid and the secondary and tertiary roots can further grow.

The second step involves the transfer of the roots to a pot or nursery bag. The roots are like a water pump and even the smallest root will help in the absorption of water. The plants are hardened in the nursery for about 1 year during which the root system will expand and become strong. After this phase, the plant is transferred to the soil.

Our team is actively involved in the root extraction of peepal, bakain and other plants. We harden the saplings in our nurseries for one year which are then planted in the soil during our plantation drives.